The lyrics on Courtney’s most recent album, Sometimes I Sit And Think, And Sometimes I Just Sit are truly what make this album one of my favorites for this summer. Every song is frenzy of internal monologue, narrated by her intriguing Australian accent.

As if each song is a train of thought, Courtney sings about the never-ending struggle of wanting to go out to a party but at the same time feeling like she wants to stay home, dealing with the pressure of living up to people’s expectations, and more. One thing I really love about this album is the fact that not every song is about lost love. Courtney sings about unique, everyday situations that pretty much every listener can relate to.

Back in middle school, I used to listen to Florence & The Machine’s “Dog Days Are Over” all the time. To be honest, I forgot about Florence for a few years until she released her third studio album, How Big, How Blue, How Beautiful this May. I loved it right away. The songs are well-written and extremely emotional. It’s obvious that Florence uses music as an emotional outlet to deal with the mental obstacles she faces. My favorite song off the album is “Ship To Wreck.” (Photo by Tony Felguerias)

My Type is one strong EP. With guitar & trumpet-intense songs that remind you a bit of   Walk The Moon, every song on the EP is worth listening to. This EP truly seems to hold the sound of summer…my two favorites on the album are “My Type,” the most popular, and “Midnight Movies.” If you like old-school-sounding bands like Bleachers and Arctic Monkeys, try Saint Motel! (Photo by Sidestream) 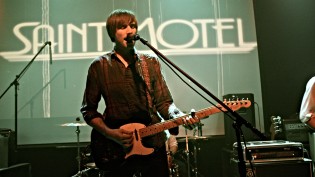 Think Lorde, Ellie Goulding and Lana Del Rey mixed…with a twist. That’s Halsey, also known as Ashley Frangipane, who’s toured with musical legends such as The Kooks and Imagine Dragons. Her debut album Badlands is set to be released on August 28th, but you can already listen to most of the album on YouTube. Her haunting, unique vocals make each song so fun to listen to. My favorites are “Hold Me Down,” and “Ghost.” I saw her live a few months ago and she was FLAWLESS. (Photo by The Skype Live Studio)