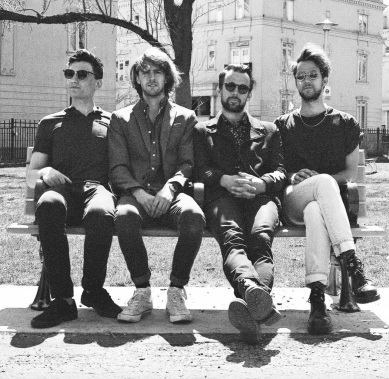 Jacob Bitove (lead vocals), Nick Bitove (drums), Andrew Keyes (bass), and James Tebbits (guitar) make up this four-piece soul-pop band, who all met while attending school in Wicklow, Ireland. After moving to Toronto last year, ROMES was born. They’ve worked with some incredible names in the industry, including Grammy-nominated music producer Tony Hoffer, who has produced albums for legends such as The Kooks and Beck. Additionally, The Guardian has compared ROMES to iconic bands such as The 1975, Years & Years and Duran Duran. The guys find their inspiration through a variety artists like Stevie Wonder and Drake, and are even pals with Irish singer-songwriter Hozier. (Who is one of my absolute favorite artists!) After seeing Hozier’s recent tweet about Romes, I reached out to them for a little interview. Read on to hear what the guys have to say about their debut EP, their dream venue to perform in, and more!

A Perfect Playlist: Tell me a little bit about yourselves, and how the band got started.

Romes: We had been playing music together in various arrangements for over 10 years. Then, last year, we realized there was a special chemistry between just the four of us…so we started ROMES and got cracking on writing our EP. We’ve been friends for so long now, it’s almost like a family.

APP: How would you describe your sound?

R: We’re 2 cups of raw energy with 1 cup Pop; a pinch of electronics, infused with 2oz of soul; garnished with some RnB. 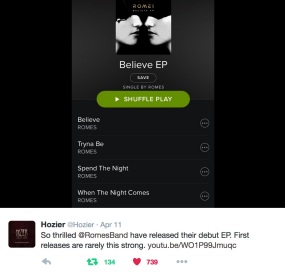 APP: What’s your relationship with singer-songwriter Hozier? I saw that he posted about you on social media praising your debut EP. (See left!) How did that feel?!

R: We’ve been friends since we were wee lads. It was very good of him to tweet about the EP. He’s as sound as he is gorgeous!

APP: What’s your favorite song off Believe, your debut EP?

R (Jacob): The song “Believe.” It has a strong place in my heart. It was written from past experiences I’ve had when people doubted my life choices, my dreams, my goals, and my passion. I got fed up, and wanted to finally stand up for myself. The only way to do that for me was to write….and “Believe” was the result. Have patience and positivity and you’ll always shine through.

APP: I really love the track “When The Night Comes” on your EP. Is there a story behind that song?

R: We were fascinated with the idea of having very minimal and sparse verses with mainly drums and three-part harmonies, and contrasting that with a huge explosive chorus. “When The Night Comes” was the result of that. Sexy and tasteful was the mission for this one.

APP: Who are a few artists in the industry today that inspire you?

R: Most of them have passed away, sadly. But those still alive – Drake, Andre 3000, Lauryn hill, Stevie Wonder…. There are too many to list them all.

APP: Are you planning to tour anytime soon? Dream venue?

We’ll be touring later this year, but nothing that’s been announced at this time. Stay tuned. We would love to get back to Ireland and play the Olympia in Dublin.

APP: If you could bring back one artist from the dead, who would it be, and why?

R: The late Prince and David Bowie. Two terrible losses to the the world of pop music this year. Oddly enough, their deaths brought us closer to their music and made us want to see them each play one last gig. May they Rest in Peace.

APP: What was the last text you sent?

APP: Anything else you want to say to readers of A Perfect Playlist?

R: Shout out to A Perfect Playlist for reaching out to us and showing an interest in our music. It’s been a pleasure answering your questions!