Rewind! Over the past few years, you’ve probably noticed a huge resurgence in retro music formats. Vinyl has seen 260% growth since 2009, according to Forbes magazine. These days, I constantly see teens in addition to adults digging through the vinyl crates in the record store I work in. What may have started as a Instagram-motivated fad has now adapted into a full fledged vinyl revolution, encouraging young audiophiles to re-embrace the physical side of music during this age of Spotify and Apple music.

In addition to vinyl, cassette tapes have recently made a comeback. Mainstream artists like Khalid, Lana Del Ray, Arcade Fire, and The 1975 are releasing their latest albums on vinyl, CD, and now, cassette. Urban Outfitters has started selling clear, portable cassette tape players. (Gotta admit–they’re pretty cool. Here’s a tip, though: you can get something similar at Goodwill or a thrift shop for way cheaper.) “Check out my mixtape” isn’t just a silly phrase anymore–kids are actually making tapes again. (Okay, maybe it’s still a silly phrase.)

According to The Verge, “Helping the cassette boom are a few factors. For one, the official soundtrack for Marvel’s Guardians of the Galaxy is still going strong, despite its 2014 release. The soundtrack, featured heavily in the movie as the personal mixtape of Chris Pratt’s character Peter Quill, sold 4,000 cassettes last year.”

If you want to get in on the trend, you can find cassette tapes at pretty much any local record store. If you’re looking to get creative and make your own, all you need is a CD collection, tape recorder, blank cassette tapes (you can get them at Fred Meyer) and Google images. I made some pretty quirky personalized mixtapes for my friends (see right and above)–they work great as birthday presents or just random lil surprises to show you care.

It’s pretty rad how retro is constantly becoming  the new cool. What’s next, the return of 8-tracks and floppy disks? I’m all for it! 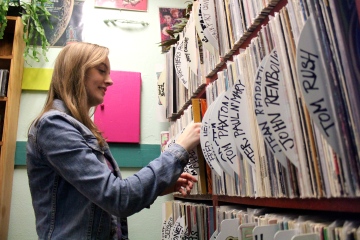 “As CD and digital sales decline in the wake of streaming services like Spotify and Pandora, record sales are on the rise. In fact, the format has seen 260% growth since 2009. While CDs sit on shelves, vinyl supply is having a hard time keeping up with demand. It may not have seemed possible 10 years ago, but vinyl is back.” —Forbes Magazine, July 2015

For Christmas this year, I got a record player. I had wanted one for months but wasn’t expecting to get one, so my parents really surprised me. It’s a Third Man Records turntable designed by Jack White, and fortunately, NOT a Crosley. (Crosley turntables tend to break within a few weeks or ruin your records with their harsh needles.) Since I started working in a record store last year, I’ve become fascinated with vinyl and the culture surrounding it.

Since receiving my first turntable, I’ve been working on expanding my record collection. So far, I own Language and Perspective by Bad Suns, Talking Is Hard by Walk the Moon, Revolver by The Beatles, For Emma, Forever Ago by Bon Iver (my favorite one to spin), 5 AM by Amber Run, Quadrophenia by The Who, Wanted On A Voyage by George Ezra, and a few of my dad’s old records. I brought my turntable with me to college after Christmas break, and it’s attracted quite a few people into my dorm room. Since most people my age listen to their favorite albums on Spotify, my turntable has become a fun, unique (and nostalgic) way to listen to music in our dorm.

I love the experience of listening to music on vinyl. The slight crackle of the needle hitting the grooves of the record before it begins is one of my favorite parts, and I absolutely love watching the record spin…especially if the record is a picture (or colored) disk, like George Ezra’s album I purchased from a Record Store Day sale. (See below.)

I have come to love vinyl simply because it encourages the purchase of physical, tactile music. I  believe that the act of holding your favorite record in your hands before listening to it results in a unique, and overall more meaningful connection with the music.

Over the past year or so, vinyl purchases have expedited due to the current generation of teenagers and young adults who now own their own turntables. Honestly, I think that this trend first arose due to the aesthetic, visual appeal that vinyl and turntables present…specifically for posting to social media outlets like Instagram. Many young teenagers seemed to utilize posting pictures of vinyl as a way to get likes, since not many people were listening to music that way. Although this may have been the initial case, I think that vinyl purchases among young adults has evolved into a genuine passion for music and appreciation for the physical representation of a favorite record.

Getting lost in record stores is one of my favorite things to do. I could spend hours browsing through records and examining album covers. Now that I have my own record player, I can actually buy albums to play…which is so much fun. If you have any suggestions of records that sound great on vinyl, please feel free to tweet me!

Photos of me by Kendra Siebert

I recently took a week-long trip to NYC with my family. New York is an incredible city with extraordinary people, performers, shows and buildings. While I was there, I wanted to check out any music-related NYC landmarks and experiences that I’m always hearing about. Here’s some of the things I was up to!

I woke up one sunny, Monday morning in NYC and began scrolling through my Instagram feed. I stopped scrolling when I saw that Tori Kelly had been on Good Morning America just a few hours before. I freaked! I figured she was hanging out in NYC somewhere, so I went through her Twitter page and tried to figure out where she might be. After a while, I found out she was planning to do a popup concert in Union Square for dedicated fans that went through a scavenger hunt to find her.

Around 5 pm that day, I was standing less then 3 feet away from Tori, watching her belt out the lyrics to her latest hit “Nobody Love,” and a few others. Although it was super hot outside, it was so worth it to see Tori again!

While my family and I were exploring Times Square, we made a stop at the legendary NYC Hard Rock Cafe. The place was decked out in all types of guitars, autographs, and outfits worn by famous artists on stage, such as Hailey Williams from Paramore. I was in a music lover’s dream. I picked up one of their classic T-shirts during my visit, and it’s pretty cool to wear it & say I’ve finally been to a Hard Rock Cafe! (Below is a picture of me wearing my shirt to work.)

On the edge of Central Park is a small, quiet area designed to be a memorial for the legendary John Lennon. The spot is directly across from the Dakota Apartments, where Lennon was shot in 1980. It’s surrounded by a green, plant/hill area called Strawberry Fields, named after The Beatles’ iconic song “Strawberry Fields Forever.” In the middle of the path to Strawberry Fields is a mosaic (that is supposed to represent a teardrop) with the word “Imagine” placed in the middle, which is the title of John Lennon’s most famous song.

The spot was beautiful, with so many people stopping to admire the design which was covered in flowers. Nearby, a busker softly serenaded the crowd with songs by The Beatles, including one of my favorites: “Let It Be,” which I caught a small clip of. It was so moving to experience this amazing tribute to John Lennon in person.

All over NYC are buskers, street performers and young artists who are making a living by  serenading crowds rushing by in subway stations & on NYC streets. I loved it, because pretty much everywhere I visited in New York I was surrounded by music. One of my favorite moments was seeing a man in Central Park who was playing the saxophone. I played the saxophone for about four years, so I always love watching others play.

Another one of my favorite moments was walking through Washington Square Park during the evening. It was so alive! Under the Washington Square Arch, people were taking turns belting out their favorite tunes, dancing and laughing the night away. It was so cool to see a group of complete strangers connect over music in that way. If you’re an August Rush fan, you’ll instantly recognize this spot from the movie. 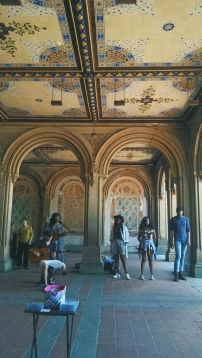 In the middle of Central Park under a beautiful bridge, a singing group called Infinity’s Song filled the air with their incredible voices. People stopped immediately as the passed, drawn to the sound of their harmonies. The group switched off singing solos, then all together as their voices reverberated off the walls of the bridge, creating amazing acoustics. Check out my video of them below. (Fun fact: the day after I took this video, Tori Kelly found them in Central Park, too. She was intrigued by their voices, and ended up asking them to join her onstage the next night at her sold-out show at the Best Buy Theater in NYC. Incredible.)

Even while rushing around crazy-busy NYC, I still found time to stop and do one of my favorite things: browse through records & CDs at a record shop. I stopped in  the famous Bleecker Street Records, which is located in the heart of NY in Greenwhich Village. I bought some cool stickers (The Who & R.E.M) for my laptop while I was there, and got lost in the store for a bit. Downstairs, I met a friendly (and fuzzy) record store employee who liked being pet. (See left!)

Bleecker Street Records was pretty cool, but it’s nothing compared to the amazing record store I work in, Music Millennium.

On my last night in NYC, I went to a Broadway musical at the Stephen Sondheim Theater with my mom! We saw “Beautiful,” which is a musical about singer Carol King’s life and music. It was absolutely amazing! The sets and costumes were incredible, the transitions were flawless, and the actors had beautiful voices. Carol King’s songs were weaved into the story of her life, which was so fun to watch and listen to. I would definitely recommend getting tickets to see this show if you are planning to take a trip to NYC anytime soon!